Is your Corpo Fechado? 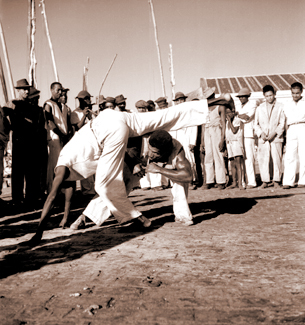 Capoeira is not only a martial art, a dance and a game. It comes along with its cultural background, which developed in the Afrobrazilian circles of Brazil and spread all over the world. It’s like HipHop, or like Yoga. It left it’s national and cultural boundaries and spread to places where some parts of it’s culture might be less well understood than others. Some interesting thoughts about cultural differences in the practice of Capoeira are given in a post by Mandingueira on her highly recommendable blog www.mandingueira.com. Even in Brazil many connotations and aspects of this art get lost due to old mestres dying and their knowledge usually dying with them. Here in Europe or in the U.S. or in Asia only few pieces of this culture are learned. This is why once in a while I come along and try to explain some of the words which you will hear in connection to capoeira. I’m not Brazilian and my connection to Brazil is solely because I love to play Capoeira Angola. So all I can give you is my limited view on some parts of Capoeira culture. If you know better, feel free to correct.

After this short intro I will now come to the question given in the title. Is your Corpo Fechado? For all those who dont know Portuguese, Corpo Fechado means “closed body”. in Capoeira, and in related Afrobrazilian cults like Candomblé, Corpo Fechado does have an important meaning. I will try to explain both the secular and the spiritual meaning of this word.

Corpo Fechado – in the Roda

The closed body in the Roda is a basic principle of Capoeira. Everybody learns it from the very beginning without having to know that they are actually working on a ‘closed body’. The Corpo Fechado in the Roda is your defense, most basically your hands and arms protecting vulnerable parts of your body. These parts are especially your face, neck, chest and lower torso.

Already doing the Ginga does demand the player to keep up his defense every time his body is moving forward. One arm always protects the face. If not so the danger of getting a kick or slap into the face is imminent (I wont judge now how nice or fair it is to kick into the face of somebody whose face was unprotected… that’s another topic). The same does account for every single movement in Capoeira. And also both in traditional and modern variants of the Game. Some Mestres do complain that in modern variants due to a higher distance between players the necessity of a “closed body” decreases. In Capoeira Angola on the other side, a closed body is a necessity – and in every second of the Game a hole in your defense can be used by your partner.

I dont want to scare you people away. And I also dont want to show you just the one side of the coin. Modern Capoeira and Capoeira Angola do allow you to show apparent “entrances” into your body. In the ideal case sometimes you might seem absolutely helpless with you body wide open. And still be able to close the body when it’s needed. That is to lure your partner into a situation where he thinks he has you, and showing him that that is not so. One of my favoritue Capoeira Angola pictures is the one posted below where the player in white seems absolutely helpless. Still, his partner does not fall into that trap keeping up his defense, knowing that a good player can defend himself in whatever position he is.

But dont forget one essential thing about capoeira. That it is not about concentrating on one thing. Corpo Fechado is a set term in Capoeira culture, but it is not the only thing. Theoretically you could have a perfect defense, but still be absolutely horrible in playing Capoeira. Thus, Corpo Fechado is one part of Capoeira, a part everybody should know of, but not the above-all most important part of it.

Corpo Fechado does also have a very religious connotation. In Afrobrazilian practises achieving Corpo Fechado is possible through specific rituals and by wearing amulets. Having a Corpo Fechado means being invulnerable against all kinds of physical attacks. If it’s knives or bullets. The most favourite person to have had a Corpo Fechado was the Capoeira legend Besouro Manganga. Manoel Henrique Pereira (1897-1924) was a legendary Capoeirista and criminal in Santo Amaro, Bahia. He was known and loved by the folks for his fights with the police. In times of danger he would transform into a beetle and vanish from the place. He was also known to be invulnerable – or only vulnerable by an enchanted wooden dagger (made of the Tucum-tree), which was the reason for his death in 1927.

But the Corpo Fechado does exist outside of Capoeira aswell. As I said, it is part of Afrobrazilian culture. The rituals and ideals behind this go back into Kongolese religious practices, where there was the belief in Kanga Nitu. Kanga Nitu was “binding your body” thorugh rituals protecting it from evil spirits. Other rituals did include the use fetishes and amuletts – socalled Nkisis – against arrows from enemies in times of war, or for a successful hunt (among many other uses). The ideas of Kanga Nitu and corresponding rituals came along with the slaves and still have an influence on Afrobrazilian culture.

One part which is to be mentioned together with it are the patuás, the amuletts which protect the faithful from all kinds of physical harm. These amuletts did contain a diversity of herbs alongside with prayers written into them. But it obviously doesnt seem to be enough to just wear a Patuá around your neck, you also have to know your prayers and rituals, and what is forbidden and what not. Basically, you have to believe and know the religion before you start “protecting” yourself with a Patuá. As the proverb says: “Quem nao pode com mandinga, nao carrega patúa.” Roughly translated: Who doesn’t know Mandinga, should not use a Patúa. Today a lot of people do carry a Patúa without actually believing in it’s use. It has become a part of Capoeira fashion. I personally do not believe in the effect of a Patúa, but I still would strongly recommend any person who carries a Patúa to learn about its implications. Even if he/she does only see it as a fashionable accessoire, it is still of use to know what you are walking around with.

There are also certain ways to “open” the body of a person, even when that person does have a “Corpo Fechado”, this does include the use of enchanted weapons (as it was in the case of Besouro Mangangá). But also the person himself can cause his “protection” to fail. One known way is to have sex. Some traditional Mestres dont recommend practising Capoeira after having had sex the night before.

So, the next time a mestre screams at you to “fechar o corpo” he means that you should keep up your defense. He usually does not mean you to be abstinent before you come to his class or to wear a Patúa, because as Capoeira does spread around the world, there will be more and more practitioners who do not believe in Candomblé or into any Afrobrazilian manifestation of those ancient Bantu traditions. Still, even if you dont believe in them, it’s useful to know about it – and even if it is only to comprehend more what we are doing, playing Capoeira.

Filed under Philosophy, The Game

18 responses to “Is your Corpo Fechado?”