Mixing styles: Can you train both Angola and Regional? 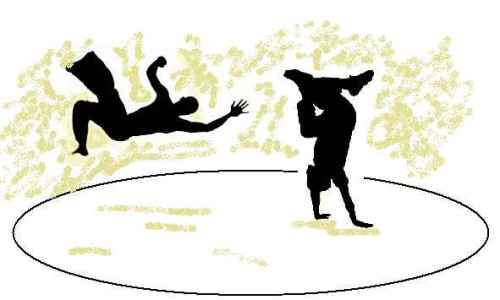 This is one of the most controverse topics in discussions between Angoleiros and Regionalistas. And it is a question which is coming up more and more often since several groups claim for themselves that they a) practise both or b) that the dichotomy between Regional and Angola is artificial and thus, that they are training “Capoeira só”. Capoeira e uma so, I agree. But most of the time this sentence is used to downsize the existing difference between the styles. Isnt it possible that there is one Capoeira, but with two different styles? Can you intermix those styles?

First I want to talk about the difference between Capoeira Angola and modern variants of Capoeira. The question I want to ask is: how big is the difference? Because, if there is no big difference between the two styles of Capoeira, than the issue is not that big, right? We have to keep in mind that these styles are not monolithic constructs. They did develop over time and under the influence of different mestres and different schools, thus both evolving into artforms with a lot of variants. Thus the issue get’s more complicated than you think.

Let’s chose the most simple solution to this problem. Below I posted 6 videos of Capoeira games and you people will make a self-test and see if you can see the difference between an Angola game and a Regional game.

Ok, so most of you were able to distinguish the different styles here, right? Good, for me that’s proof enough that there is not only one Capoeira, bBut two distinguishable styles.

Can you intermix the styles?  As supporters of a mixed Capoeira do say over and over again, there was no dichotomy between Capoeira Regional and Capoeira Angola before Mestre Bimba and Mestre Pastinha started teaching these. So logically there should be the possibility to get back to the traditional “pre-forms” of Capoeira by mixing Capoeira Angola and Regional, right? Although this logic seems to be intriguing, as an Angoleiro I have to say that there is one basic mistake in this assumption. That is to see Capoeira Angola as something which did evolve from the old Capoeira and which is significantly different from it, as different as other modern variants of Capoeira. We Angoleiros do insist on the fact that Capoeira Angola is the traditional Capoeira (or at least what comes closest to it). The dichotomy did evolve when the modern form of Capoeira Regional did come to existence. So if somebody wants to rely on tradition, why doesnt he play Capoeira Angola?

Thus, when you try to intermix the modern form with the traditional form, then what you wont get back to a traditional form. Present mixes of Capoeira Regional and Capoeira Angola are sometimes called Capoeira Contemporeana or Capoeira Angonal. When you search for both terms you will find modern Capoeira groups, Angoleiros still would still call them Regionalistas. Check it yourself on Youtube by typing in Capoeira Angonal. Some of the videos do sometimes resemble an Angola game, but as an Angoleiro (and I assume also as a modern Capoeirista) you will be able to see the difference. On the other side I have to admit that it is hard to name the differences. There is a lot differentiating the Angoleiro from the Regionalista: the ginga, the way of moving, the use of malicia (there is also malicia in modern Capoeira though), the expression, the speed, the proximity of the players to each other and much more. Although we might not be able to pinpoint it, we can tell if we see an Angoleiro playing or not.

But what is with those old Capoeiristas who did say that they were neither Regional and neither Angola like Mestre Canjiquinha or Mestre Leopoldina?

With these Mestres it is more difficult to put them into certain categories, as they are clearly no Regionalistas, but they seem to differ from the typical Angoleiro style. To answer this you have to remember that most Angoleiros nowadays are in the tradition of Mestre Pastinha and his students Mestre Joao Grande and Joao Pequeno. But there were other mestres, and those played different. For Angoleiros there is no contradiction. The other old mestres might play differently, but for an Angoleiro they are clearly traditional Capoeiristas, thus: Angoleiros. On the other side, supporters of the “Capoeira e uma so” idea do bring these examples as evidence that present day Capoeira Angola is also just a new style and that by practising Capoeira Angonal, you are actually really traditional! Angoleiros, seeing themselves as protectors of the traditional Capoeira, see “Angonalistas”, their game, and start getting suspicious. Is Capoeira Angonal just a marketing idea, brought up when being “traditional” started to be cool again? Because, Capoeira Angonal did not exist (neither as word nor as idea) when traditional Capoeira was threatened by extinction, when being modern was all, and being traditional was considered antiquated or plain stupid. Only when people started realizing that being traditional is not equal to being old-fashioned and antiquated, and when traditional Capoeira did start to rise in reputation again, only then the “true” “pre-forms” of dichotomy free Capoeira did come up.

Can you train both and keep them separate?

So, for an Angoleiro you can’t intermix the styles and make a Capoeira Angonal. That would be just taking over some of the traditions, but keeping the modern changes in it. Thus, it would still not be traditional Capoeira Angola. It would be more like taking your favourite pieces to spice your game up again, but denying the rest.

On the other side there are other groups who say that they train both, but separated from each other, having Capoeira Angola classes in one week and Capoeira Regional classes the other weeks. At first thought, there cant be a big problem with this, right? The only thing you have to do then is to define when you are going to play Regional, and when you are going to play Angola. I have met people who did say that they train both and yes, you could see that. It was still not the game of an Angoleiro. The following video is an example where you see a group of Regionalistas training Capoeira Angola.

At the end: it is one body and one brain we are training. And if you have seen people from other martial arts training Capoeira you know exactly what I mean. What you learned before, does influence your game. Be it another martial art, be it Capoeira Regional or Capoeira Angola. I trained for a year with a group of Capoeira Contemporeana, and I have observed two things about my game: One, if I would want to play the same way as the students of that group, I would have to train years with them, and concentrate on not using what I learned before. Only after years people will have a hard time seeing if I was an Angoleiro before or not. And on the other side, only after a year of training with a modern Capoeira group my first Capoeira Angola teacher and other Angoleiros could see the difference in my game. Less than before I was going into Jogo de Dentro, I was kind of restricted in my game. Had problems seeing through the malicia of my teacher, and so on.

I dont say it’s bad that I trained with a group of modern Capoeira. Life is a learning process and for sure I have learned things in the last year. But I realized myself that my game started to change, and develop away from my Capoeira Angola skills. That is why I now start focusing on Capoeira Angola again.

Is it impossible to play both?

No it’s not, when you see Mestres play you can see that there are a lot of Mestres who can play both styles of Capoeira. With some of the bigger Mestres it is impossible to see if they are Angoleiros or Regionalistas. They blend into any Roda. And that’s something admirable for sure. One nice example is the game in the following video.

At least not with a few years of experience.

So what does it mean for us? First, we have to decide on what we are gonna be. Do we want to be Angoleiros or Regionalistas? Do we want to concentrate on one, or do we want to learn both? It’s not a mistake to chose to learn both styles. I can see that there are different qualities in the different styles and that you want to learn and experience them both. I as an Angoleiro dont want to recommend on training some kind of mix of the two styles, because these mixes have not proven themselves to be a real alternative to the established schools and styles. And I would also recommend you to learn the two styles in different schools. Not because one school might not be able to learn you the basics of both, but because the chance to learn both properly is higher when you go to a modern Capoeirista for modern Capoeira, and to an Angoleiro for Capoeira Angola.

42 responses to “Mixing styles: Can you train both Angola and Regional?”